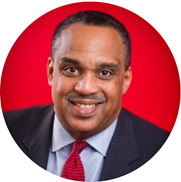 David Harrington is President and CEO of the Prince George’s Chamber of Commerce. During his tenure, the Chamber has had a 50 percent increase in revenue and membership and played a central role in influencing state and local policy. Also, David is Senior Policy Advisor for CommonHealth ACTION – a leading nonprofit for improving community health.

Prior to joining the Chamber, David completed fifteen years of public life commencing as Mayor of Bladensburg, Prince George’s County Council Member, and Maryland State Senator. During this extensive period of public service, David was President of the Maryland Municipal League, National Chair of Economic Development with the National Association of Counties, and Chaired the Maryland State Task Force on Physical Education. He has been awarded the Phyllis Newman Award for nonprofit advocacy, Human Services Coalition Legislative Award, Hurston/Wright Ella Baker award, and Legislator of the Year from the Maryland League of Conservation Voters.

David is a graduate of Howard University and completed graduate work at Miami University of Ohio. He also served on Harvard University’s Summer Institute on Reading, Writing, and Civic Education, and was Associate Director and Faculty at the University of Maryland James MacGregor Burns Academy of Leadership.

He is a resident of Prince George’s County for over 30 years and is married to Cheryl, business owner of Shortcake Bakery in Hyattsville, Maryland. They have two sons, Stephen a graduate of Morehouse College and Brown University, and Christopher a graduate of the University of Maryland Smith Business School.