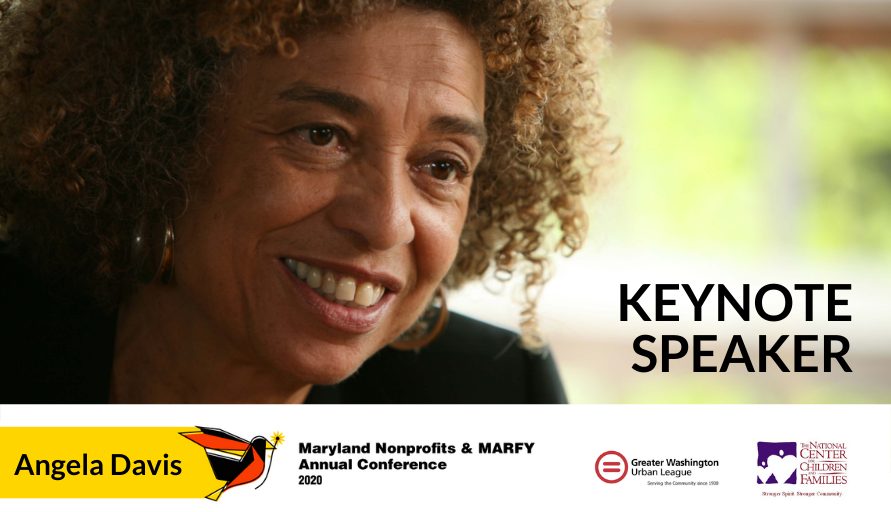 Maryland Nonprofits is delighted to announce activist, author, and social justice pioneer Dr. Angela Davis as the keynote speaker at the 2020 Maryland Nonprofits & MARFY Annual Conference on the morning of October 14, 2020. Through her activism and scholarship over the last decades, Angela Davis has been deeply involved in our nation’s quest for social justice. Her work as an educator – both at the university level and in the larger public sphere – has always emphasized the importance of building communities of struggle for economic, racial, and gender justice.

Angela Davis is the author of nine books and has lectured throughout the United States as well as in Europe, Africa, Asia, Australia, and South America. In recent years a persistent theme of her work has been the range of social problems associated with incarceration and the generalized criminalization of those communities that are most affected by poverty and racial discrimination. She draws upon her own experiences in the early seventies as a person who spent eighteen months in jail and on trial, after being placed on the FBI’s “Ten Most Wanted List.” Davis has also conducted extensive research on numerous issues related to race, gender and imprisonment. Her most recent book is Freedom is a Constant Struggle: Ferguson, Palestine, and the Foundations of a Movement.

This keynote address is made possible because of generous sponsorships from the National Center for Children and Families and Greater Washington Urban League.

NCCF has earned its reputation as a trusted and recognized champion of the community and its most vulnerable members by providing the love, structure, and education found in healthy families and responsive communities. Through a dedicated team, a wide variety of programs, and a commitment to enhancing the lives of the children and families we serve, NCCF is a force for human change. It is the mission of the National Center for Children and Families to create total, healthy living environments for vulnerable children, youth and families, and the quality of life which empowers their ability to thrive and demonstrate responsibility.

The Greater Washington Urban League (GWUL or the League) is on a mission to increase the economic and political empowerment of historically vulnerable and diverse populations. For 80 years, the League has stood on society’s frontlines as well as in the trenches serving as a safety net and facilitator of opportunity in Washington, DC and Montgomery County and Prince George’s County, Maryland. As one of the District’s oldest civil rights organizations, the League continues to carve a distinctive path towards justice and fair play by putting families first and catering to the needs of children and the elderly, and everyone in between. Since 1938, GWUL has guided individuals on the road to self-sufficiency, impacting over three million lives. The Greater Washington Urban League is a 501(c) (3) non-profit community service organization, a member agency of the United Way of the National Capital Area and one of over 90 affiliates of the National Urban League.