Five Opportunities for Nonprofits in a Trump Administration 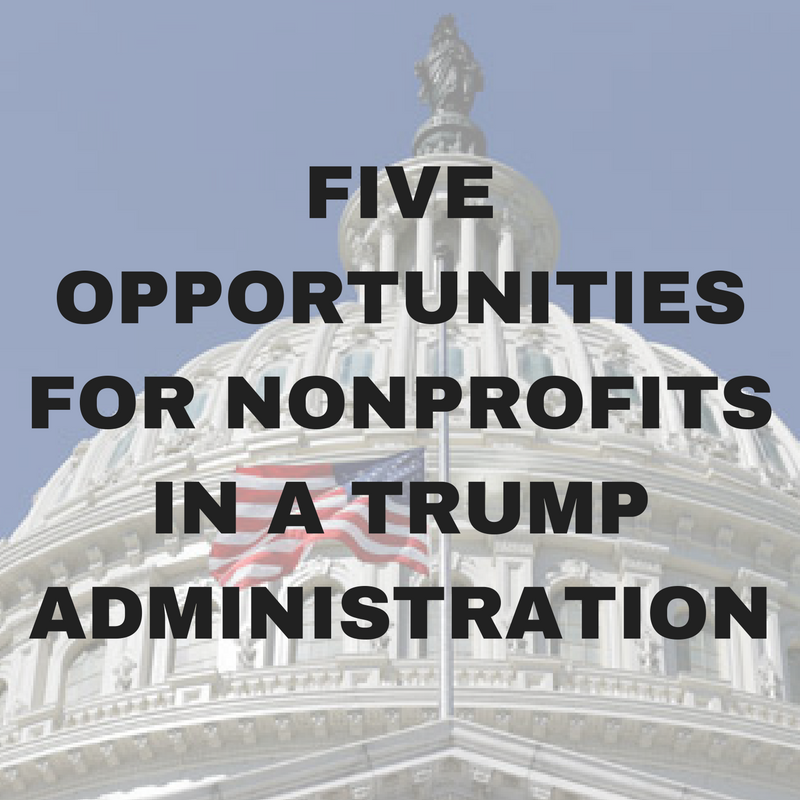 One of the biggest strengths of nonprofit organizations is that we are non-partisan, and can create a space for community problem-solving that is not muddled by political conflict.  Nonprofit staff and board members are diverse and include a wide range of political perspectives – Democrat,
and Independent.  Having said that, studies have shown that the staff of foundations and charities do tend to lean more Democratic in their voting and donations to political parties.  Therefore, it is safe to assume that many nonprofit staff members are feeling gloomy about the implications of the election of Donald Trump to the presidency.

There are many issues of serious concern to nonprofit leaders:

The list of worries for nonprofit leaders in a Trump Administration is a long one, and I don’t want to discount that.  However, it is also important to focus on opportunities that emerge when dramatic leadership changes happen.  We are wise to think of ways nonprofits can be strategic in taking advantage of and get involved in shaping certain priorities President-Elect Trump and Congressional Republicans have promoted.  These include government reform, infrastructure, focus on inner cities and rural areas, deregulation, and a grab-bag of causes favored by Republicans.

Let’s not bury our heads in the sand.  Lester Salamon points out in his book, The Resilient Sector, that nonprofits have a superior ability to adapt and pivot in the face of challenges, including drastic cuts during the Reagan Administration.  President-Elect Trump was often criticized during the campaign for changing his positions on major issues over time.  To me, that means he is open to new information and is influenceable.  We should advocate for a cabinet level position in the executive branch to liaise with the nonprofit sector.  Engaging diverse community-based organizations, veterans’ groups, hospitals and universities, performing and fine arts organizations, advocacy
and civic associations will make America stronger and a Trump administration more successful.  We must insist on being engaged in shaping the changes that are to come.  As Frederick Douglass famously said, “power concedes nothing without a demand.”