The cardinal rule of fundraising  is to make giving easy; and one of the most frequently used tools for simplifying donor decision-making is the list of suggested gift amounts on printed return devices and online donation pages. This series of gift amounts (also commonly served up as Membership Levels) is called a Gift String, and the options we provide donors can impact renewals, upgrades, and total dollars raised quite significantly.

Many nonprofit organizations calculate Gift Strings for annual appeals by using a donor’s Last Gift Amount as the reference for calculating the “base” (or smallest) gift string option. This is a quick and simple method for building Gift Strings, but it might be resulting in chronic “under asking.”

Consider this possible scenario: A donor gives $100 consistently for five years, but last year, he gave $50. If the gift string uses Last Gift Amount in calculations, the options presented the donor might look similar to “$500, $250, $100, Other.” But if the Largest Gift Amount of $100 is used in the calculation, the gift string bumps up to “$1,000, $500, $250, Other,” which offers a significant upgrade opportunity in alignment with the probable capacity of a donor giving $100 year-over-year.

In addition to a true upgrade as offered in the above example, organizations can capture percentage increases in giving by widening the span between gift string amounts, and avoiding the amounts with demonstrated low giving appeal.

To hone your organizations Gift String scale, we recommend analyzing your organization’s gift spikes and optimizing your giving circle levels, or your typical “ask” amounts. Even though your file will inevitably show spikes at gift amounts for which you have consistently ask, if there are significantly lower performing ask amounts, try increasing the span or rounding the ask amounts. Some groups have found that by simply rounding “odd” gift levels (such as $35, $75, $150 and $750) up to “round” numbers, which are traditionally more appealing, they were able to increase giving within the same gift levels. For example, replace gift circles of $75 and $150 with $100 and $250 and both the number and net of giving in each level will likely increase.

Below is an example of a Gift String worksheet that uses the donors Largest Gift in Last 5 Years and organizationally defined Gift Spikes to calculate the Anchor Ask Amount (Ask 1), the Target Ask Amount (Ask 2), and the Baseline or Renewal Ask Amount (Ask 3). 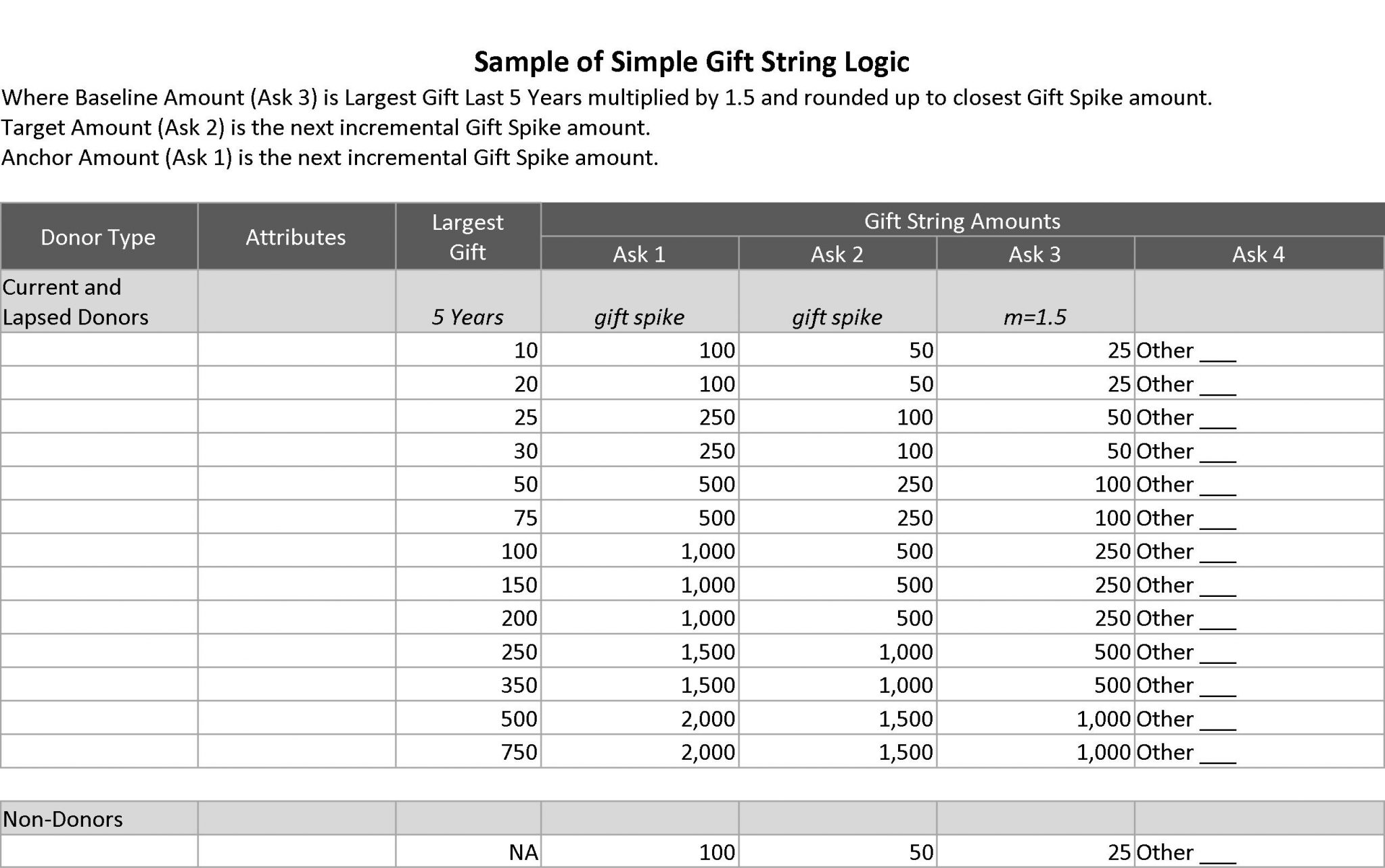 The Direct Marketing industry has vast amounts of research on how the visual lay-out, amounts requested, and the scaling of amounts can affect response rates and gift amounts. Organizations with thousands, or even hundreds of thousands of small donors rigorously test, analyze, and refine appeal elements in an effort to maximize every dollar, or pennies, donors give because even small marginal increases across large numbers of donors can impact total giving. But for most small-to-mid-sized groups (especially under 10,000 pieces per appeal), the best use of resources is likely to define sound Gift String logic rules, standardize implementation, use consistent methodology to analyze results, and make incremental adjustments over time.

Connect with Maryland Nonprofits on Facebook, Twitter, LinkedIn, and Google+, tell us what you think and what kind of topics you would like to see more of on our blog!

« It’s Harder Than You Think! Perspective on the Nonprofit Job Search by an Experienced Nonprofit Professional
It’s Not Too Late to Join #GivingTuesday! »