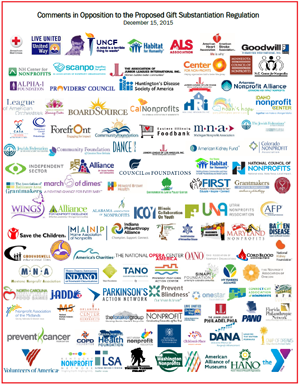 This post originally appeared in the National Council of Nonprofits’ newsletter here.

More than 37,000 concerned individuals and organizations submitted comments on the proposed gift substantiation regulation, and virtually all that are viewable expressed a common theme: it is a very bad idea for nonprofits to be asking for donors’ Social Security numbers, maintaining that personal information in their files, and submitting it to the IRS. In the view of many, “never is the better answer” when the question is whether individuals should give their Social Security numbers to people claiming to be soliciting on behalf of a charity.

The question arose in September when the Treasury Department and Internal Revenue Service published proposed regulations to permit, but not require, charitable nonprofits to file a new, separate information return with the IRS (in addition to the Form 990) by February 28 every year to substantiate contributions of more than $250 in value. The new informational tax return (“Donee Report”) would require the nonprofit using it to collect the donor’s name, address, and Social Security number (SSNs) or other taxpayer identification number. Nonprofits taking this option would also be required by that date to provide a copy to each donor listed (but only the portion that contains “information related to that donor”).

Opposition to the proposed rules was broad-based and consistent. A set of joint comments submitted by the 215 nonprofits expressed concern that the collection of SSNs would “expose the public to increased risk from identity theft, impose significant costs and burdens on nonprofit organizations, and create public confusion and disincentives for donors to support the work of nonprofits.” See also the joint news release from Independent Sector and the National Council of Nonprofits. In separate detailed comments, the National Council of Nonprofits challenged the procedural irregularities in the rulemaking process and demonstrated that the proposal to collect SSNs runs counter to IRS’ own advice, the policies of law enforcement agencies across the country, and clear directives from the federal government and Congress.

Read more on the National Council of Nonprofits’ newsletter…

« Maryland Raises $6.4 Million on #GivingTuesday 2015!
Maryland’s Quality of Life and “State of Our State” Address »