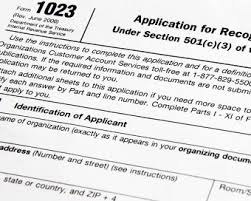 The IRS has released and approved for use beginning this month a new Form 1023EZ as part of its effort to deal with a 60,000+ application backlog for tax-exempt status. Although initially proposed for use by organizations that would qualify for use of the Form 990EZ in their annual reporting for at least three years (remaining under $200,000 in annual revenue), the new form will be limited to groups anticipating no more than $50,000 in annual revenue – essentially those who would be able to file the Form 990N in their first three years.

The initial version of the form drew substantial negative feedback from many sources, and that was cited by the IRS in lowering the eligibility threshold. Maryland Nonprofits had joined other nonprofit associations, nonprofit attorneys, and state charity officials, who agreed that streamlining was important for smaller groups, but felt that the IRS had gone too far too fast in eliminating any requirement to submit organizational documents, or specifics about charitable mission or finances for review.

While most critics welcome the lower threshold, many are still concerned that the new form may indicate a ‘backing-away’ from the IRS’ commitment to effective oversight, and will place more pressure on state level regulation.

The 2½ page new form must be filed online, and the 20 page instructions include an eligibility worksheet that excludes a number of organization types such as consumer credit organizations, hospitals, schools or colleges, groups with over $250,000 in assets, etc.

Backlog Reduction–  Revenue Procedure 2014-40 issued in connection with the release of the Form 1023EZ clarifies which, and how groups with pending Form 1023 applications use the new form:

(1) The Service will accept for processing a completed Form 1023-EZ from an eligible
organization that has a Form 1023 pending with the Service, provided that the Form
1023 has not yet been assigned for review. The Form 1023-EZ will be treated as a
written request for withdrawal of the pending Form 1023, and the Form 1023 will be
treated as withdrawn as described in section 6 of Rev. Proc. 2014-9. The user fee
paid for the Form 1023 will generally not be refunded. See section 6 of Rev. Proc.
2014-9. In addition, the filing date of the Form 1023-EZ (not the withdrawn Form
1023) will be treated as the date that the organization provided the notice required
under § 508 to the Service. If the filing date of the Form 1023-EZ is within 27
months from the end of the month in which it was organized, the organization may
be recognized as exempt from the date it was organized. If it is not, then the
organization’s exemption, if granted, will generally be effective from the date the
Form 1023-EZ was filed. See section 8 below.

As of this writing, the IRS website indicates that most applications filed since October 2013 have not yet been assigned for review. The application fee for the new form is $400 – the same level that applies to groups under $10,000 in revenue using the Form 1023.