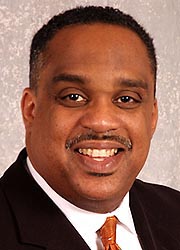 The Honorable Senator David Harrington’s legacy and memory rings out across our state of Maryland, his beloved Prince George’s County, and the many thousands of people who have benefitted from his lifetime of service. Senator Harrington served as a member of the Maryland Nonprofits Board of Directors from 2009 to 2010 and was again a member at the time of his passing. We feel his loss profoundly. In the coming days, much will be written about Senator Harrington’s notable public roles – of course as a state senator (2008-11), Mayor of Bladensburg (1995-2002), and Prince George’s County councilmember (2002-08), where he fought for justice and economic development that uplifts all people. His leadership at the Prince George’s Chamber of Commerce, and his more recent and sadly too brief tenure at Kaiser Permanente Mid-Atlantic States underscored his ongoing commitment to the uplifting of community through nonprofit organizations.

Senator Harrington was a leader among the Prince George’s Nonprofit Advocacy Steering Committee co-convened by Maryland Nonprofits and Nonprofit Prince George’s where he powerfully gave voice to the economic impact of nonprofits and the essential role nonprofits play in working with local and state governments to create jobs and meet community needs. As a board member, Senator Harrington served on our Fund Development Committee and brought energy, humor, and significant contributions. Board Member Harrington always brought a unique and insightful perspective to novel issues and was beloved by his colleagues.

Above all, Senator David Harrington was an amazingly kind, humble, and thoughtful human being. His generosity knew no bounds, his spirit was infectious, he brightened every conversation with kindness and good cheer. When Senator Harrington was talking, one could feel his full attention, his powerful presence, his deep caring, and even his fierce passion for what mattered most, making a difference to real-life people in the community.

Thank you, Senator David C. Harrington, for shining your all-too-brief light on us, and oh, did you shine brightly. We will miss you terribly.