As we close out November and close out the Thanksgiving holiday, I feel gratitude for all MLU has been able to accomplish in 2022.  Our work has been challenging, often having to face evolving needs with few resources – such as what is top of our minds right now as we face the 2022 mid-term elections – Latinx voting rights. With only election day earlier this month (Tuesday, November 8), it is clear that there exists a universal lack of understanding about how the Latinx community thinks and feels – what they value.

Many folks on both sides of the political spectrum are either jumping for joy that Latinos are voting more and more conservatively, or they are handwringing with concern about whether or not to include Latino voters in the mix of their campaigns because they are largely independent voters. The reality is that who Latine are, is much more complex. Latines are swing voters, and a meaningful share of Latino voters remain on the fence this election cycle.

The Latinx community – especially here in Maryland is very diverse. What does that mean exactly? It means that they are multi-ethnic, multi-racial and come from many points of origin and have multiple types of experiences. Though the community share many characteristics like strong family values, they also pride themselves on being independent thinkers.

Elections are about preferences – whether of candidates or parties. According to Equis Labs – a national Latinx research firm – the Latino vote shifted with an 8-point swing toward voting Republican between 2016 and 2020. Yet, at this point, there is no evidence of a further decrease in Democratic support since President Biden won. The Republican party made those gains, and then the community has basically stayed put.

Why are Latinos on the fence? Simply put, a lack of enthusiasm for either party. Latinos/as do not see themselves reflected in the issues they care about.

And what do Latinos/as value? They highly value self-reliance, but they also believe that government has an important role to play in ensuring a level playing field. Latinos are not easily inserted into any one box.

And what does the data show?  According to a recent UnidosUS and Mi Familia Vota survey, Latinos tend to reject taking away people’s rights. On abortion, for example, 75% agree that no matter their own personal beliefs, it’s wrong to make abortion illegal and to take that choice away from others (this includes 76% of Catholics and 68% of non-Catholic Christians). On gun violence and crime, 72% of Latino voters were concerned about easy access to guns, and 60% say that elected officials need to find a way to put an end to school shootings.

The economy is also topmost on Latinos minds – though Hispanic Republican (90%) and Republican-leaning registered voters are more likely than Hispanic Democratic and Democratic-leaning voters to say the economy is very important to their vote – that doesn’t mean Democratic-leaning voters are not interested. In fact, 75% of those surveyed responded that it was very important. Latinos are highly concerned about inflation, jobs that pay well, and access to capital for their small businesses and these are among the top issues that Hispanic community members want to see elected officials address. Addressing these issues in real terms means housing/rental assistance, health insurance assistance, and investing in education to help students catch up after academic losses incurred during the pandemic.

The fact that Latinos are overwhelmingly concerned about inflation and the economy is a warning to anyone who cares, particularly to Liberals. And Conservatives who are interested in gaining more Hispanic voters to their side should be alarmed that continued silence or endorsement of white supremacy does not play well with Latino voters. Eighty-four percent (84%) say it is important to them for elected officials and other leaders to speak out against hate groups, and 55% say they could not vote for a candidate supported by white supremacist/nationalist groups.

Maryland Latinos Unidos (MLU) is based on a model of collaboration, engagement, and communication. At a time when the United States faces unprecedented challenges to democracy, it is critical for all of us to come together to stop those who would defeat democracy from doing so. But the responsibility is not just on nonprofit and community organizations to do something. The parties themselves should get smarter about their investments in Latinx community civic engagement. It’s their opportunity to lose. 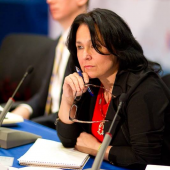 Dr. Gabriela Lemus is the Executive Director of Maryland Latinos Unidos. “MLU” is a statewide network of organizations, businesses, and individuals who support Latino and immigrant communities. We work within and with the Latino/Hispanic community in Maryland by supporting Latino-serving nonprofits, convening around public policy priorities, and working together in a common cause.
« 30 Years of Board Contributions!
Meet your donors where they are »