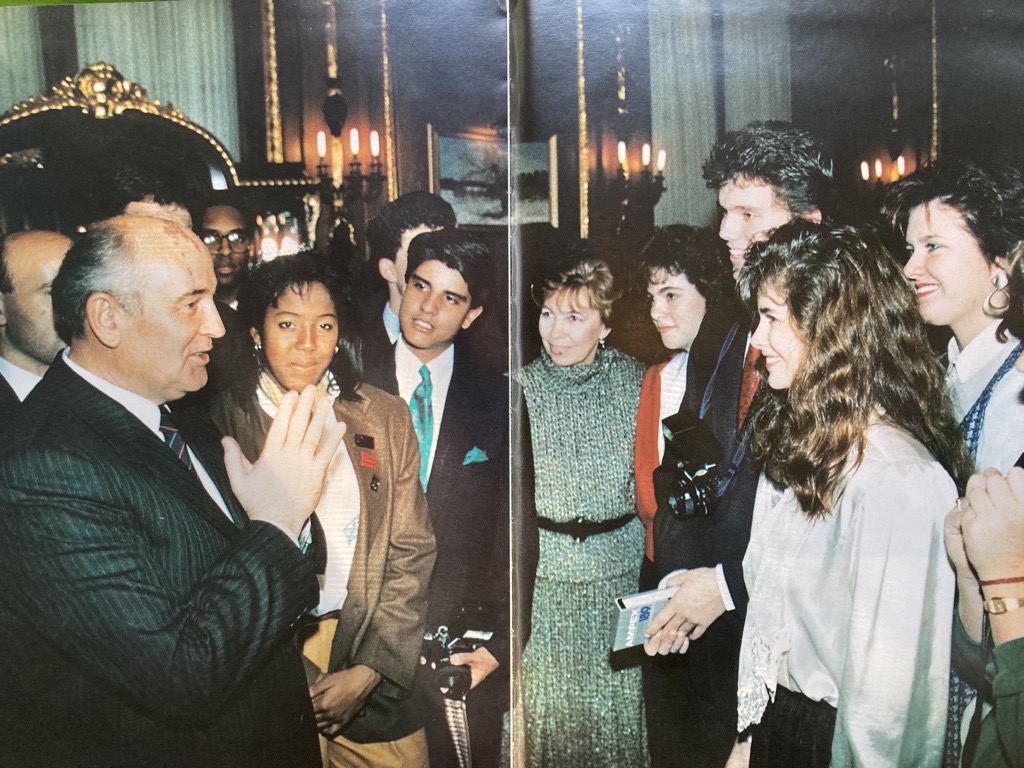 As we mark the passing of Michael Gorbachev into the pages of history, I felt inspired to reflect on the opportunity I had to meet Mr. Gorbachev. In 1987, I attended a National Association of Student Councils conference when I was in high school and went to a break-out session led by a start-up nonprofit, Direct Connection. In the workshop, they shared a videotape (a new technology at the time) of Soviet students my same age, talking about how they wanted peace with the United States. As they shared about their hopes and dreams, I was truly shocked that they seemed to be just like us, and that they were not in the “death to America” camp. That may seem trite these days of the internet and social media, but back then, making a “direct connection” with a Soviet citizen was unheard of. Fear of nuclear war was a formative part of my childhood. Ronald Reagan coined the term “Evil Empire” to describe the Soviet Union, and it stuck.

Direct Connection ultimately became a youth-led coalition of 60 American and Soviet students coming together to call for peace. Funded by the Close-Up Foundation, we had a week-long retreat in Helsinki, Finland (neutral ground) where Michael Doyle, author of How to Make Meetings Work and inventor of flipchart brainstorming, volunteered his time to facilitate our mini-summit to come up with peace proposals to share with our leaders. It was intense and difficult at times, at one point with the Soviet students walking out and accusing Michael Doyle of being sent by the CIA to sabotage our meetings! The Americans, Soviets, and a handful of Finnish students worked through it, including a tense overnight train ride from Leningrad (now St. Petersburg) to Moscow where we hammered out our final disagreements, and came out with joint recommendations for peace between our countries.

We successfully arranged meetings with President Ronald Reagan at the White House and Soviet General Secretary Gorbachev at the Kremlin, both of whom we meet twice as the peace process unfolded. For President Reagan, the affair was protocol-driven and felt like a nicey-nicey. Michael Gorbachev met with us for more than an hour, was deeply engaged in the suggestions we were making, and shared in the press conference during the Strategic Arms Reduction Treaty talks, about his experience in meeting with us young people. He was looking to the future and saw great promise in peace.

Some take-away reflections, large and small:

Thank you, Michael Gorbachev, for being the bold visionary that brought down the Berlin Wall, freed the people of Eastern Europe and the former Soviet republics, and negotiated peace between the superpowers. Thank you to the nonprofits that made these experiences possible for me and for the many amazing people I met along the way.

Heather Iliff is President & CEO of Maryland Nonprofits, responsible for advancing the organization’s vision to create a highly effective, ethical and equitable nonprofit sector that drives change through collective action and advocacy.
« A Caring Culture: The Antidote to “Quiet Quitting”
ACTION TO CARE – MARYLAND NEEDS A BIG PLAN TO TACKLE GUN VIOLENCE IN 2023, AND WE ALL PLAY A PART »