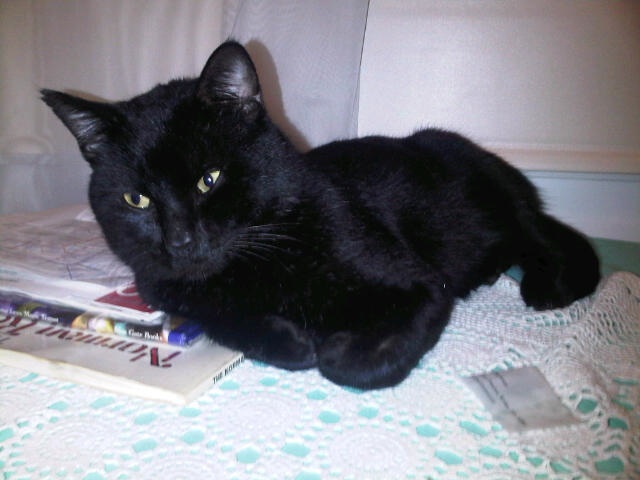 It took a long time to write this one, as I’m still a little sad about it:

I was driving across country over the holidays and had the… distinct pleasure… of stopping in Hooks, Arkansas. The town is made up of a few trailers and two gas stations – one station apparently only takes gold bullion. I stopped at the other station.

As I walked inside to pay I saw a friendly black cat approach a woman and meow. The woman kicked the cat. I literally saw red and ran into the station, “Someone’s black cat just got kicked in the parking lot!” I gritted my teeth knowing what I was going to hear. It’s a good thing I’m fluent in southern hick (being one myself) because the answer came back so thick a foreigner would have been baffled. I’ll translate to save time,

“Oh lady. Someone pulled up to the station two days ago and threw that cat out of the car window. It’s been begging ever since. I like cats, use to work at the shelter here, but that one’s not even smart enough to wander onto the freeway and get hit. It won’t leave. We’ve been calling it Obama.”

“The cat’s coming with me,” I blurted out. Then I internally slapped my face. I was driving to California, a three-day road trip, with no cat supplies. Oh well.

The station worker helped me collect the cat in minutes and handed me some old hotdogs for him.

Upon being placed in the car, the cat I called “Lucky,” licked my hand and calmly stepped into the back seat. He curled up, and went to sleep. He slept all the way to Dallas where I acquired a litter box, food and a carrier.

On the two consecutive 14-hour days of driving that followed, Lucky would sleep calmly in his carrier and chow down during our regular food stops. He gained two pounds in days. He was silent, only meowing when he had to use the litter box. I would pull over, and put the box outside the car. Lucky would calmly step out of his carrier; use the box and then hop back in his carrier. I’ve rescued dozens of cats. I’ve never seen anything like it.

Sometimes we talked. I asked him about his broken ribs and the bite out of his ear. He said he didn’t want to talk about it. Cool.

Lucky got strong on the road trip, but upon returning to CA I had to leave town again. I found a foster and told them he seemed to like indoors and outdoors, but because he wasn’t fixed yet keep an eye on him outside. I kept calling to check on him. He seemed to be doing great. But on my return to LA I found that Lucky, left outside to his own devices, had been taken to a shelter by a well-meaning neighbor. AAAAaaahhhhh! After a few panicked hours on the phone I located him at the West LA Animal Shelter.

Back in town, I raced into the shelter and as soon as I walked into the room with a dozen or more cages I was greeted by Lucky. He stood up in his cage, meowed, and reached through the bars. The volunteer in the room was awe struck. He remembered me. I was so relieved I started to cry. Now, I had to get him out.

It is not easy to negotiate with a city employee. Lucky would be on mandatory hold for a few days, then have basic medical work done, the only way I could bust him out was by adopting.

I would have to adopt him and then re-donate him to Heaven on Earth who had agreed to keep him in their no kill facility. Because they are saints and I love them. The shelter refused to tell me medical schedules or euthanasia schedules – and the yelp reviews of the shelter were awful as far as last minute euthanasia decisions. I was forced to stalk them for days. My dumb mistake had gotten him in the clink. I was busting him out.

Finally, on the exact date, at the exact hour he could be adopted, I ran in and adopted him. He had lost all his weight again and contracted a serious sinus infection, but he was in one piece. I nursed him a few days. He slept on the end of my bed and greeted me when I came home. He needed a bath but seemed too weak to have one in my care.

A few days later I had to drop Lucky off at Heaven on Earth Sanctuary with a donation for his continued up-keep and his blanket.

He was the best cat and even though we had such a short time together I miss him. I hope someone finds my calm, smart lap cat – he’s the best. To that person I want to say – please take care of my traveling companion.