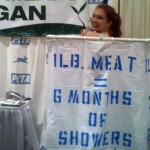 Ladies and Gentleman, the following is an account of my weirdest volunteer activity as TheGoodMuse- yet.

I had never volunteered with PETA (People for the Ethical Treatment of Animals), but then I got this email, which said something like…

Come take a shower in the middle of the LA Convention Center to promote water conservation by eating less meat.

Sold. You had me at public nudity.

In all seriousness, I’m a vegetarian. I have been since I was a teen.  It’s one of the best decisions I ever made for my health. I also think it’s important for everyone to eat less meat (or no meat/fish) for the environment’s sake. Meat production pollutes more than all the vehicles on the road combined and our lust for fish is stripping the ocean bare. To say the least – I was game to support this cause.
And… the PETA shower campaign is mad genius. People taking a shower in public wrapped in a curtain printed with the factoid: 1 lb. of meat = 6 months of showers. It stops traffic – it literally has stopped traffic on Hollywood and Highland in Los Angeles. As soon as I climbed into the shower, in a little white bikini that no one could see, foot traffic in front of the PETA booth stopped and the other volunteers were able to distribute info. It was a riot, and I would do this activity again but…
That being said lets break down the problems. 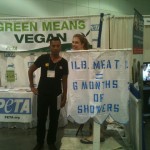 I was on a raised platform and the bar to the top of the shower was about five and a half feet off the ground. I was told you couldn’t see over it.
You couldn’t see over it unless you were a male who was… oh… let’s say… about six feet tall, slightly perverted, not at all slick, shameless, and you stepped right up to the shower to ask me (with a head tilt and eyes down) why I had become a vegetarian. Lots of men meet all of these requirements.

Sir, I know what your doing. Not cool.

Also not appreciated… The guys who held their cameras aloft, arm fully extended up, to get the full shot.

I’m in a bikini you desperate, sad…

I would have preferred to do this volunteer activity with a male friend in the shower as well.  They could have acted as a bull sh*& shield.  Someone who could give creepy men scary looks.  I tried, but I’ve been told my “I will kick your ass” look is easily misinterpreted and not at all scary.
PETA should also make sure that there is a volunteer on hand big enough, and forceful enough, to bounce perverts.  I can’t believe this is needed, but I felt it was.

Now lets talk temp. The first 30 minutes I was fine, I knew the water was cold but it was like being a little kid at the ocean – too much fun to care about hypothermia. After 30 minutes – goose bumps. By the end of the hour I’m pretty sure the US Geological Survey was registering my body tremors. Oh it was sooooo cold. Ohhhh! I had to take a 45 minute hot shower at home to even begin to thaw. Maybe I get cold too easy. I know volunteers that have done this campaign in the snow. But I feel that both a volunteer’s health and safety should be the first priority of any organization. They are volunteers. They are not being compensated in any other way besides happy feelings. Protect happy feelings.

All that being said I would recommend this volunteer experience to anyone of like mind. It’s one of those once in a lifetime deals you definitely want to tell your grandkids about. You will walk away with killer stories. And I also highly recommend becoming a vegetarian. If not for the environment, or the animals, then do it for your health.