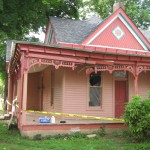 I never go back home. Not just because of the expensive plane tickets. My family can be… difficult. My grandfather was one of the only consistent people in my life, thus the tribute when he departed. But I wanted to attend my brother’s law school graduation, which would put me in the path of my extended family. So I flew into Nashville, TN two weeks after the worst flood in over a century. I spent some time doing disaster relief. Oh… and I helped clean up after the catastrophic flood, too… 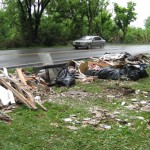 Once I had landed in the bosom of the south it was next to impossible to find time to escape the cavalcade of dinners, lunches, and general family nagging to volunteer. Finally, on Sunday, I secured two hours to myself. I set off for the neighborhood of Antioch; an old part of Nashville that had found itself submerged under 30 feet of water only days before. I’ve never been in a disaster zone. I’ve seen Anderson Cooper in disaster zones – in his tight black t-shirts, looking good, emotionally sad, but always pulled together. I thought I would be prepared as an Anderson devotee, but no. The smell hit me first, then the insects, then the mud and then the sadness.

A flood zone smells like death. Like a rodent that died in your garage or wall or behind the fridge – only magnified and put in a humidifier so it sticks to your skin. Everything is rotting, molding, turning black, and crumbling. Flood conditions are also the perfect breeding ground for mosquitoes. In two weeks, Nashville had developed swarms so thick they needed ground control to keep from knocking into each other. As soon as I stepped out of my car I was covered in mud. I hadn’t necessarily done anything, the mud just jumped on my clothes. These were the small things I hadn’t anticipated. The sadness though… you could taste it. It was in the silence, the lack of laughter, the slowness with which everyone moved, the dirt that people didn’t wipe from their cheeks, it was everywhere. I had been told that insurance companies weren’t reimbursing people in Nashville because no one had flood insurance. The people of Antioch had been wiped out and you better believe that level of despair has a taste. 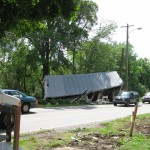 The visuals were too bizarre to absorb. Everything seemed like a special effect: a double-wide trailer thrown against a hardware store, a beautiful Victorian split in half, and trees decorated with toilet seats, clothing, and tricycles twenty feet in the air. I’ve attached pictures I took of some of the damage.

I’m not going to talk much about what I did. I only had two hours to give and other people were going to be there all day so I didn’t do much. The house I was working on was being gutted of everything that could grow mold – that meant everything save the 2x4s and bricks. It smelled like death, was dirty, and felt like a steam sauna. Basically I scooped, swept, and carried wood and plaster to a debris pile.

I found a Norfolk Naval Base cap in the debris. I couldn’t let them throw it away. I took it to the guy everyone said was an owner or knew the owner. No one could get the story straight. He said to trash it – there had been a whole uniform, but at this moment the family didn’t want to keep it. I proceeded to look for the uniform in the debris. Tossing away military uniforms is tantamount to sin. I couldn’t find it. But I kept the hat. Maybe when the panic subsides I can get it back to the owner.

« The Power of Goals – Free E-Book
Finding the Right Look: Redesigning a Logo for My Heroes Network »