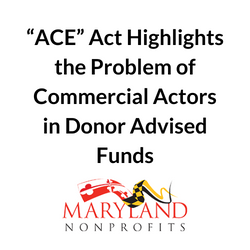 Charitable giving through donor advised funds (“DAFs”) is on the rise in America, accounting for an increasing share of all charitable giving. Community foundations across the country pioneered donor advised funds as a way to engage donors in supporting local charities over the long-term. United Ways and other federated giving charities also utilize DAFs to match community needs with donor interests.
In the past several decades a group of commercial actors has entered that space, with “Fidelity Charitable” surpassing the United Way Worldwide as the nation’s largest charity. Like other commercial actors such as Goldman Sachs, these are at their core investment companies, and operating a “charity” is not their primary aim. Donor advised funds currently allow an immediate tax deduction and lack any specific schedule or deadline requirements for money to be disbursed to charities. Commercial actors have therefore flourished in their business allowing their donors to lock away wealth in tax-deductible donor advised funds that may never make their way into actual working charities.

A bill pending in Congress aims to correct this problem by imposing restrictions or limitations applying to all donor advised funds – the Accelerating Charitable Efforts, or “ACE” Act (S.1981).

Maryland Nonprofits supports the effort to reform DAFs to ensure that donated funds actually get to working charities. We believe that the commercial actors should be prohibited from operating in a way that prioritizes donor interest and investment profit over community need. The law should prioritize and favor community foundations and other types of charities that do prioritize community needs, provide direct services, or focus specific issues ranging from religion to civil rights, and are raising funds for those purposes, unlike commercial sponsors that lack any incentive or mission-based imperative to see funds put into action.

While the ACE Act appears to recognize the need for this distinction, it fails to do so in an adequate way, and would actually be harmful to community foundations and other charities that offer DAFs to further their overall mission of serving the community.

The ACE Act’s “safe harbor” provisions would apply to “Qualified Community Foundations”, by definition requiring an organization to be organized and operated “for the purpose of understanding and serving the needs of a particular geographic community” and to hold at least 25% of its assets outside of donor advised funds. In our view this is too restrictive and does not account for the wide variety in size or other circumstances, such as age or location, that can make these provisions problematic for many community foundations.

Moreover, it excludes other equally effective charitable DAF sponsors that serve specific cultural or religious communities, or groups with specific health or social needs, without respect to their location in a particular limited geographic area. In Maryland there are respected well-governed community foundations and other charities sponsoring DAF’s that would not meet these requirements for “safe harbor” under the bill.

We strongly endorse the effort to address the concerns cited above, and to improve data collection about DAF distributions, but as written S.1981 would be detrimental to many effective and responsible charity-driven DAF sponsors.

Henry Bogdan joined Maryland Nonprofits as Director of Public Policy in 1997, after a 20-year career in policy analysis, advocacy, and government relations for the City of Baltimore. Henry is responsible for implementing Maryland Nonprofits’ Public Policy program and assisting organizations with legal or practical questions arising from their own advocacy efforts. Henry’s background in nonprofit tax-exemption issues, his broad knowledge of federal and state laws governing nonprofit organizations (including fundraising regulations), and his familiarity with government processes and the inner workings of state and local legislative bodies make him an ideal speaker and trainer. Henry is a graduate of the University of Baltimore Law School.
« The Maryland State Budget Picture Everything’s Coming Up Roses
La representación importa: el crecimiento poblacional de los Latinos lo exige »