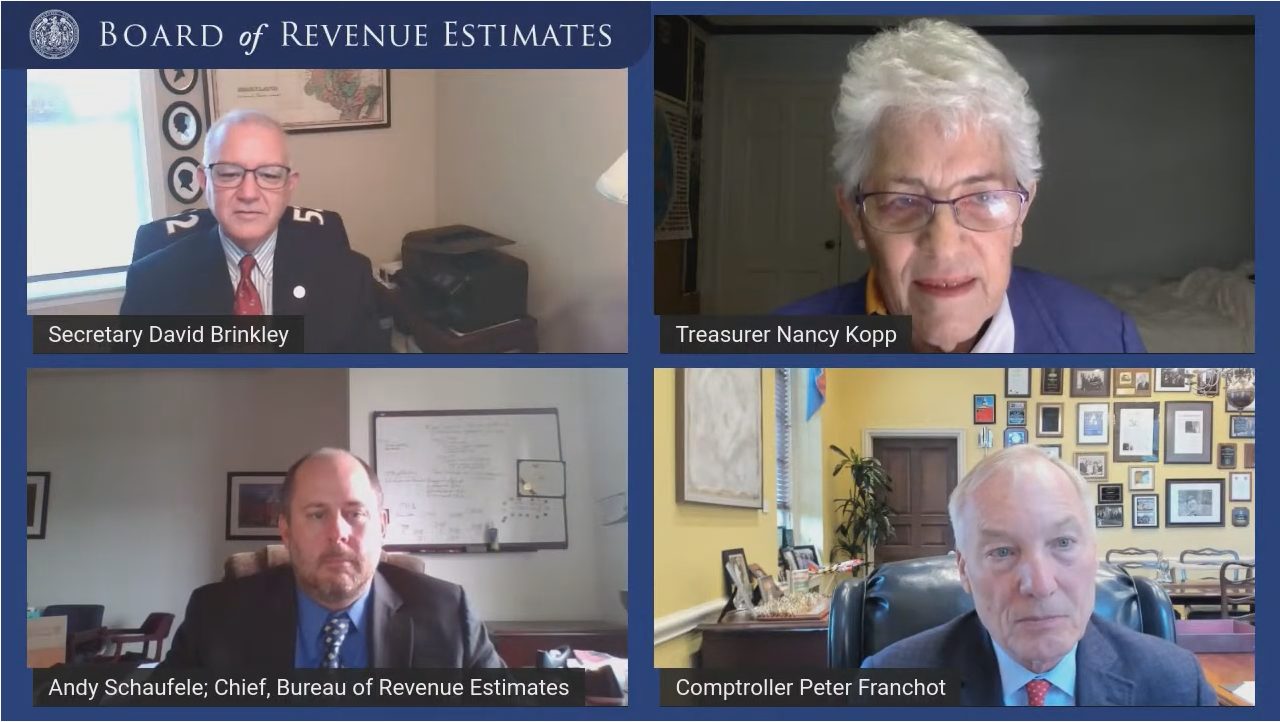 Andrew Schaufele, the State’s chief revenue estimator, just presented the most upbeat briefing I have ever heard from a reputable economist.

The close-out results of the fiscal year that ended in June, plus new revenue estimates for the current and upcoming years add up to $4 billion of good news for the state budget.

Schaufele found that the Federal stimulus funding in 2020 and 2021 saved our country from a deep recession. In Maryland, the amount of federal stimulus through last July equaled 9.4% of the state’s economy.

And we have not yet seen the full effects of the economic stimulus yet. That will come out over the next year or two.

Schaufele believes it’s likely that the Federal aid has permanently elevated the state’s revenue base.

How is this possible?
Long story short: the federal government’s economic policy worked. It has not worked for everyone. Unemployment remains high. Many individuals and families face hard times. Overall, however, the Covid recession was very brief, and the recovery was strong – what economists call a “V-shaped” recovery.

Progressive features of Maryland’s tax structure helped to minimize losses and magnify gains. Maryland places less income tax liability on low-income households. Middle- and upper-income taxpayers were largely able to either maintain or increase their incomes, often working remotely and benefitting from a rising stock market. Their income tax bills and tax withholding held up or went up.

Maryland now imposes sales tax on on-line sales and certain digital products. Obviously, these sales increased in the Covid quarantine, and the state got its 6% cut.

Last year’s (fiscal year 2021) close-out: $1.7 billion over the previous estimate. The budget enacted last April had already estimated a $0.7 billion surplus. So the actual surplus for June 30, 2021 was $1.7 billion bigger, totaling the $2.4 billion figure you may have heard about.

What this means
Together this gives state budgeters $4.1 billion dollars more than the amount they expected six months ago.

As a result, there will be less pressure on ARPA funds to offset revenue shortfalls. There will be no need for cost containment in the current year. And there will be capacity to add to the budget.

Cautions
Even with all this good news, there are some risks and cautions to keep in mind.

Covid. The State’s economic and revenue forecasts assume continued improvement in the Covid pandemic. If new variants cause a new wave of lockdowns, if schools shut down, or if there are other serious economic disruptions from the pandemic, it will affect the state’s revenues. However, Shaufele emphasized that Maryland’s high vaccination rate and continued improvement in vaccination rates will help avoid new Covid-related revenue losses.

Inflation is a concern. In the past year supply chain issues and wage pressure has caused inflation to notch up. Schaufele believes that the price increases are mostly transient but will continue for next year.

Federal debt and deficits are another concern. Traditional economic theory holds that government debt will crowd out private investment and economic growth will slow after Covid recovery. Physical and human infrastructure investments, if done right, would help to build sustainable growth and hold federal deficits down.

Federal Risks. Congress has now passed a Continuing Resolution to keep government funded through December 3. However, there’s still a risk that fiscal brinkmanship on Capitol Hill will disrupt the economy. A federal shutdown, or a federal debt crisis would harm Maryland’s economy and would reduce the revenue estimates.

How much of the increase is ongoing? To the extent the revenue increase is a one-time burst, the state will be reluctant to commit to ongoing spending increases. Some of the increase in individual income taxes relates to capital gains income. Capital gains are notoriously volatile. They can shoot up in one year and then collapse unpredictably all at once.

Over the next couple months, Governor Hogan and the Department of Budget and Management will be assembling the proposed budget for fiscal year 2023. Until the Governor presents the budget on January 19, that process unfolds largely behind closed doors. In its 2022 session, the legislature will not have the ability to add items to the Governor’s proposed budget. Under a constitutional amendment approved last year, the legislature will have that power starting in 2023.

If there is something your nonprofit would like to see added to the budget, you need to persuade the Governor, the Budget Secretary and/or the relevant state agency head to support that item.

With these preliminary revenue estimates in place, we expect those discussions will be underway behind the scenes very shortly.

There is an unusually large amount of revenue available this year. But you still need proactive and effective advocacy right now to get favorable consideration for your item.

Neil Bergsman is the Senior Policy Analyst at Maryland Nonprofits. His work focuses on fiscal affairs, nonprofit research, and economic policy. Neil has worked for more than 30 years in state financial management, policy analysis and budgeting in Maryland. Prior to joining Maryland Nonprofits, Neil was Assistant Director of the Maryland Department of Budget and Management’s Office of Capital Budgeting, where he helped to formulate, prepare, and execute the state’s $1.5 billion capital budget. Neil held other positions in the Department of Budget and Management, the Department of Juvenile Services, and the Maryland General Assembly’s staff. Neil directed the Maryland Budget and Tax Policy Institute, a project of Maryland Nonprofits. The Institute conducted nonpartisan public policy research and advocacy, focusing on how state budget and tax policy affects low-income and other vulnerable Marylanders. Neil was the president of the National Association of State Budget Officers for 2002-2003 and served on NASBO’s executive committee from 2000 to 2004. Neil has taught graduate-level classes in budgeting and financial management at the University of Maryland – Baltimore County and the University of Maryland School of Social Work. He has conducted training and made presentations for national organizations, state agencies, community groups, and advocacy organizations. Neil holds master’s degrees in Public Sector Financial Management from the Maryland School of Public Policy and in Public Policy from the University of Maryland-Baltimore County.  His bachelor’s degree is in Government and Politics and Sociology from the University of Maryland, College Park.
« We’re Hiring!
“ACE” Act Highlights the Problem of Commercial Actors in Donor Advised Funds »