Did you know that nonprofits employ 1 out of every 10 workers in Maryland?

Nonprofits Count: The Economic & Social Impact of Nonprofits in Maryland, the District of Columbia and Virginia

A Joint Report of Maryland Nonprofits and the Center for Nonprofit Advancement. 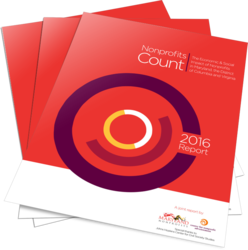 Maryland Nonprofits and the Center for Nonprofit Advancement are pleased to partner on the release of Nonprofits Count: The Economic & Social Impact of Nonprofits in Maryland, the District of Columbia and Virginia, a first-ever report to illustrate the significant role nonprofits play in our region’s economy and quality of life. “Most people recognize the enormous contributions that nonprofits make to our daily lives providing many of the services that make our communities, cities and counties ideal places to live, work and play,” said

Sawida Kamara, author of the report.  “What is not well known is the powerful impact nonprofits have on our economic development.”The data provided in this report offers insight on the size, scope, and growth of the nonprofit sector in Maryland, the District of Columbia and Virginia; nonprofit employment; volunteerism and charitable giving to nonprofits; philanthropy; and information on other unique issues faced by the region’s nonprofit sector.  “The nonprofit sector is a phenomenal engine of economic development, showing year-over-year employment growth and millions of volunteers, all working to deliver critical community services every day,” said Glen O’Gilvie, President & CEO of the Center for Nonprofit Advancement.Nonprofits employ 1 out of every 10 workers in the region. That’s almost 650,000 workers in the District of Columbia, Maryland, and Virginia.  The nonprofit sector is the second largest industry in the region in terms of employment, behind only the retail industry.  Nonprofits in the region contribute over $112.3 billion dollars per year to the economy through wages paid, retail and wholesale purchases, and professional service contracts, contributing 12.4 percent of the region’s gross domestic product. “It is interesting to note that nonprofits play an important counter-cyclical role in employment during recessions, noted Heather Iliff, CEO of Maryland Nonprofits.   “As was true in prior recessions, nonprofit employment continued to grow from 2007-2012, while for-profit employment contracted in that same period.”  The report shows that nonprofit employment in the region increased on average by 11 percent from 2007 to 2012, while employment in the for-profit sector decreased during the same period (-1.7 percent). Other key findings include:

To get further information about the data contained in this report and to discuss county and sub-regional economic impact reports, contact Maryland Nonprofits at 410.727.6367 or research@mdnonprofit.org.

Nonprofits Count was produced in partnership with: