Final Look Back at the 2019 General Assembly 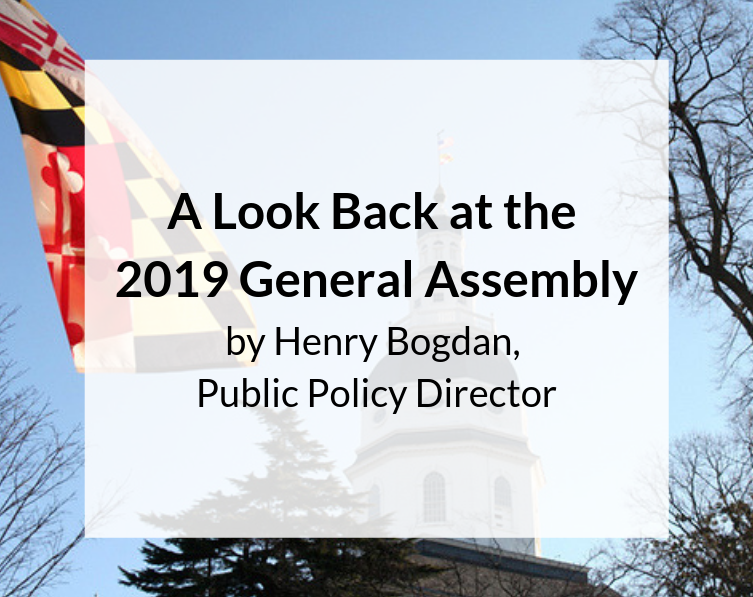 There were numerous positive outcomes and achievements during the 2019 Legislative Session. One lasting memory of the 2019 General Assembly will be sorrowful: the passing of Speaker Michael Busch just one day before Sine Die. The mood at Sine Die’s adjournment was somber, not celebratory.

In contrast, on May 1, Delegate Adrienne Jones of Baltimore County was elected to be the new Speaker of the House of Delegates, giving us much to celebrate as she becomes the first woman and first African-American elected to lead either house of Maryland’s General Assembly.

The budget for the coming year, FY 2020, was balanced with relatively little pain. However, out-year deficits are still projected and funding must be found for the implementation of the Kirwan Commission’s recommendations. Please contact us if you would be interested in working to increase state revenues to avoid possible funding cuts to existing programs. See the 90-Day Report by the Department of Legislative Services for a fully detailed fiscal and policy review.

There were major successes on several of Maryland Nonprofits’ priority issues, as well as on other bills we supported. We worked in coalition with different advocates, and supported efforts led by others on these issues. Where we took the lead and succeeded, that was possible only with the assistance and support of many advocacy partners.

Two major health-related measures we supported were passed, and both took effect without the Governor’s signature. Even in their amended forms they represent significant progress.

The Clean Energy Jobs Act, SB 516, enacted and signed by the Governor, requires the state’s electric utilities to acquire at least half of their energy from “Tier 1” renewable sources by 2030, includes increasing sub-goals for use of wind and solar generation, and sets requirements and standards for future solar- and wind- energy developments.

The Fight for Fifteen, HB 166 and SB 280), succeeded and the Governor’s veto was overridden. Unlike the last minimum wage increase, these bills provide for reimbursement adjustments for most service providers, although these are higher for some services than others. This was an important amendment requested by many nonprofits supporting the minimum wage increase – including Maryland Nonprofits.

The most anticipated question of the session, the fate of the Kirwan Commission’s recommendations to reform K-12 public education, got a positive response with the passage of the Blueprint for Maryland’s Future, SB 1030. Discussed below, this was a major priority for many nonprofits. A special workgroup has been appointed by the presiding officers to recommend changes in the education funding formulas to the 2020 General Assembly.

A major initiative Maryland Nonprofits and several advocacy partners put forward, was a study to improve transportation access to employment, health care and other critical human services, for those without public transit or private vehicle options. The House version of the legislation, HB 923, passed on sine die. If your organization serves people who face challenges when reaching your services or employment, please contact Henry Bogdan. We are looking for your stories and suggestions to prepare for the launch of the Task Force created for this study.

Held a Racial Equity Institute for Policymakers on January 15 in which 35 members of the General Assembly participated. During the course of the day, 3 sessions were held (one primary session and two auxiliaries). Policymakers had the opportunity to:

The CASH Campaign also worked with others urging the IRS to ‘forgive’ various penalties taxpayers might incur from not properly withholding throughout the 2018 year due to the effects of changes in the December 2017 federal tax bill. The IRS responded to this effort and is waiving penalties for many whose tax withholding and estimated tax payments fell short in 2018. Read the IRS press release here.

HB 557 / SB 509 championed by the Community Development Network as part of a multi-year effort to reform and improve the Tax Sale process, enable local governments, by legislation, to establish a process to withhold tax delinquent vacant lots or vacant and abandoned structures from traditional tax sales, and instead to proceed (“in rem”) against the property itself in a foreclosure action auction sale. This may allow local authorities to reduce the time these properties remain as blighting influences by facilitating a faster sale to a private party, or the government to take possession.

League of Women Voters of Maryland

Other Legislation We Supported

HB 461 and SB 400 – Strengthened the criteria for the Maryland Higher Education Commission to approve institutions as “private nonprofit institutions of higher education”.  Enacted

HB 320 and SB 455 – Would have established a 2020 Complete Count Commission to coordinate and assure efforts across the state.  Failed

HB 366 and SB 982 – Would have created a Commission to study funding of “non-emergency medical transportation,” particularly for dialysis patients.  Failed (also an object of House Bill 923 above)

HB 584 and SB 263 – Would expand the State earned income tax credits for individuals without qualifying children by increasing the income thresholds at which the credits phase out and making the credits fully refundable.  Failed

HB 585 and SB 262 – Would expand the State earned income tax credit for individuals without qualifying children by increasing the percentage value of the credit and making the credit fully refundable.  Failed

HB 1108 and SB 990 – Proposed a state constitutional amendment to allow the legislature to add or increase items in the executive branch budget, that do not increase the overall appropriation level in the Budget Bill.  Failed

HB 1287 and SB 632 – Would establish a funding source for the Community Development Program Fund (created by 2018 legislation) by dedicating the excess receipts in the abandoned property fund, after distributing of $80 million to the state’s general fund.  Failed

SB 450 – Would mandate future appropriations for the Office of the Attorney General, equal to at least the amount appropriated in fiscal 2018, plus amounts needed to administer the Maryland Defense Act of 2017 and the Financial Consumer Protection Act of 2018, and any amount received from settlements where the Attorney General represented the State.  Failed

SB 929 – Would have ‘de-coupled’ Maryland from a federal tax change that imposes tax (as ‘unrelated business income’) on amounts nonprofits spend to provide certain commuting benefits to their employees.  Bill withdrawn before hearing.

HB 846 and SB 482 – Would have shifted Medicaid funding of behavioral health services to administration through MCO’s (managed care organizations) rather than the current (‘carve out’) specialty mental health system of community providers, jeopardizing treatment for patients not in Medicaid and the coordination among high-risk populations, and possibly diverting resources to administration.   Withdrawn