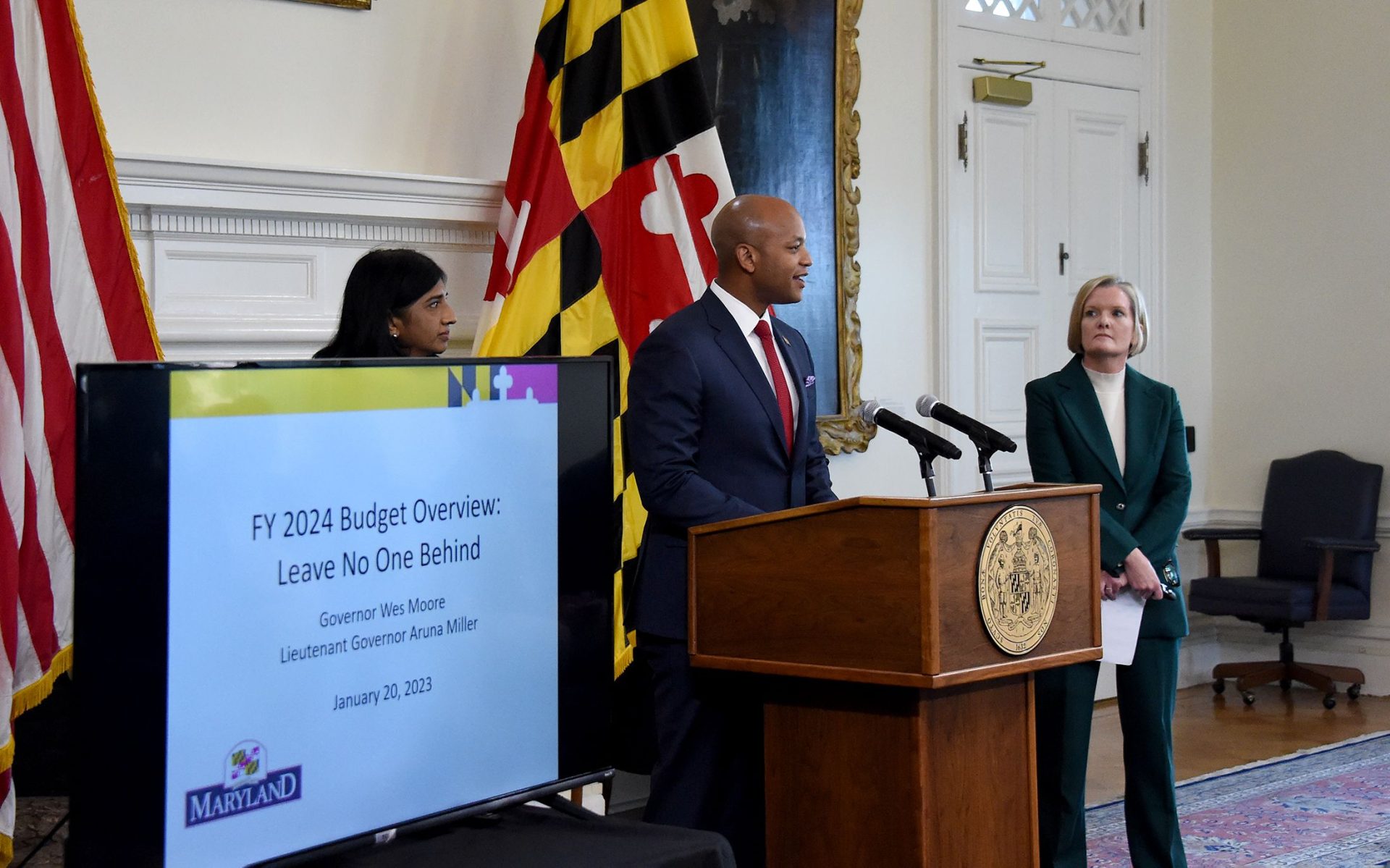 Image from The Baltimore Sun

On January 20 -as required by the Maryland Constitution- the newly installed Governor presented his proposed budget for the fiscal year that will start in July. The budget totals $63.1 billion, which is actually a 3 percent reduction below the current year’s budget. The reduction is not because Governor Wes Moore made cuts to current state services. It reflects a reduction from the unusually large amounts of federal funds and state surplus revenues incorporated in this year’s budget.

Although the budget was due just two days after Inauguration Day, the outgoing Hogan Administration actually turned the budget process over to the Moore-Miller Transition team in mid-December.

The Power-Point Presentation on the budget that Governor  Moore used to brief legislators and journalists is here. The 242-page “Budget Highlights” book is here. (Book Review: “People who like this sort of book will find this the sort of a book that they like,” to quote Mark Twain.)

Cautious about the Economy Despite a record-breaking state surplus of $7 billion, Governor Moore voiced concerns that the strong financial picture may not continue. Moore finds that the state’s economy is under-performing –  lagging other states in income growth, population growth, and the unemployment rate.

He pointed out that the strong surpluses were supported by ONE-TIME boosts from Covid-related federal aid and taxes on investment gains and business income. These boosts cannot be expected to continue into the future – especially as the US Federal Reserve Board continues to notch up interest rates, deliberately slowing the economy in order to fight inflation.

As a result, Moore’s proposed budget is cautious in spending the surplus. The budget maintains a ten percent “Rainy Day Fund” – $2.5 billion. It reserves $1 billion for future costs of the “Blueprint for Education” and for transportation projects ($500 million each).

Proposed Budget – Use of $7 Billion Surplus

The general fund balance at the end of the year – essentially the state’s checking account balance – would be $820 million. The “structural surplus” would be $178 million. That’s the amount by which ONGOING revenues exceed ONGOING expenses.

The Budget Prioritizes Child Poverty Reduction, Education, and Transportation. The Governor explained that in setting priorities, he is emphasizing expenditures that will help the state’s future competitiveness.  Governor Moore intends to  “…deploy our surplus intentionally and strategically.”

The only expenditure categories that grow in total over the current year are primary and secondary education, and transportation. Funding for public schools increases by $784 million, not including the $500 million reserved for future “Blueprint” costs.  The Transportation budget features increases for transit ($164 million) and highways ($275 million – mostly in Federal funds).

In addition to the EITC and Child Tax Credit proposals, the Moore budget includes quite a lot of initiatives of interest to nonprofit advocates. Here are some examples:

Now What? So, whether you got what you wanted in the Governor’s proposed budget or not, as an advocate for your nonprofit and its mission you still have work to do.

If your item is IN the proposed budget, you need to support and defend it to make sure it stays in.

If your item did not make it, there are still opportunities. There is room within the legislature’s spending affordability guidelines for a supplemental budget potentially in the range of $470 million (subject to change depending on March revenue revisions and legislative actions. In addition, this year the legislature has the ability to ADD to the Governors’ budget (as long as they make offsetting cuts). At the very least, you can educate legislators and executive officials and begin to make your case for the next budget cycle.

Here are some of the key dates in this year’s budget calendar. 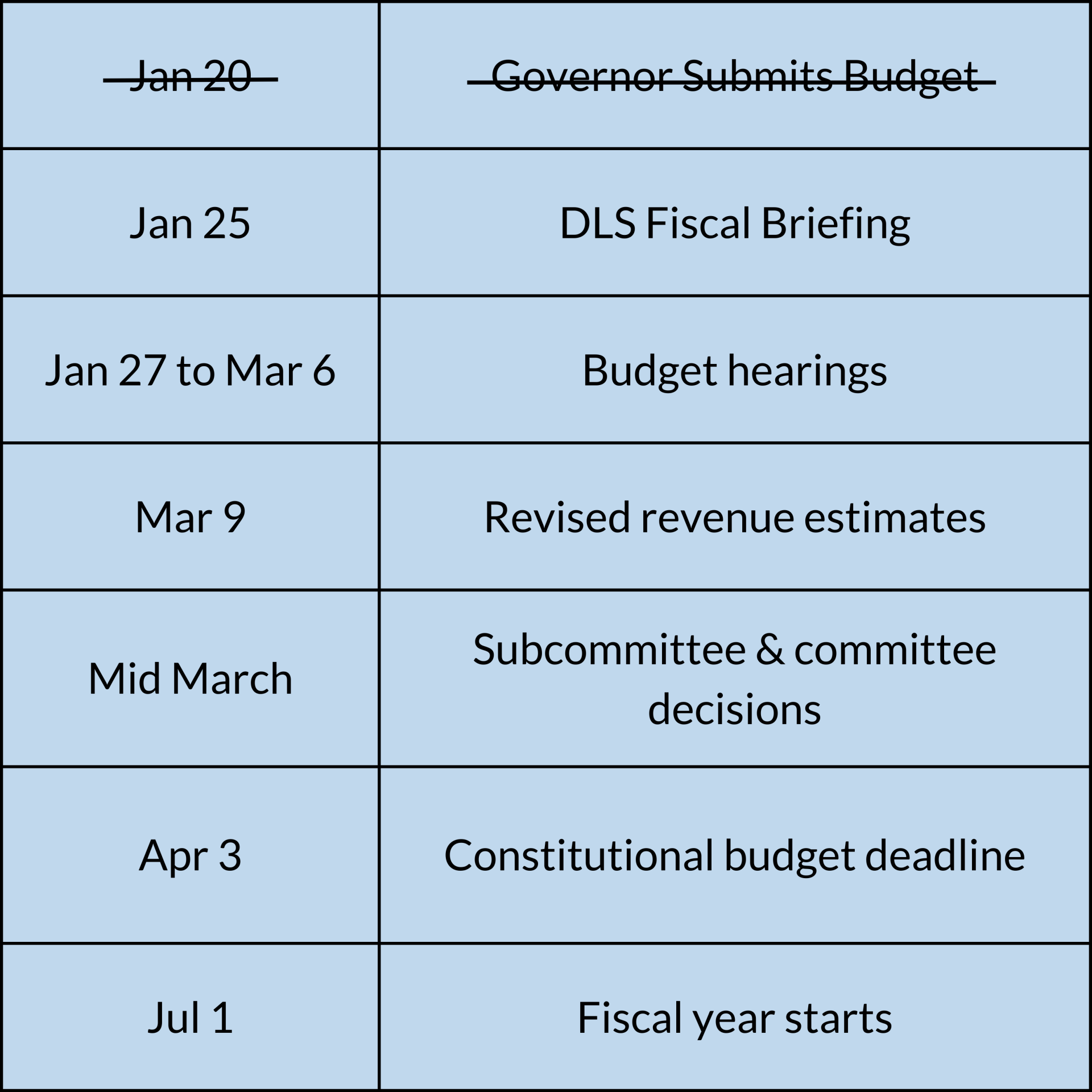